While working at Florence, was able to help the business build a number of solutions. From supporting the build of Florence Flex and Florence Academy to the complete leading of design of Florence Rota a pivotal tool to help improve the lives of care home managers across the UK.

Florence Rota, developed in 2020, is the UK’s first rota SaaS software designed entirely for care homes – providing essential support through the Covid crisis and beyond. With 62% of care home managers saying their staff rota takes up the majority of their time per week (due to Covid-related absence, as well as social care’s 122,000-vacancy staffing gap), it’s never been more important for homes to maximise scheduling efficiency and put that time back in to focussing on care. Care managers waste hours per day manually updating rotas in the form of paper calendars or excel sheets, as well as juggling phone calls and Whatsapp group notifications to find available staff. Or, they struggle with dated and confusing software packages that aren’t designed for care teams.Florence Rota removes these problems by helping managers build rotas smoothly, in minutes. Staff are automatically texted daily shift invites, which they accept by tapping a link.

Creating design systems & libraries, establishing user flows, user research, testing, ideation, onboarding clients, migrating clients & marketing.At Florence I led the design & research of the Product now known as Florence Rota, the main aim of the project was to improve the expereince care workers and managers went through when interacting with a rota, the small team consisisted of one Product manager, one developer and myself the Lead Product designer on the product, within a short 6 weeks we were able to take Rota from ideation to Launch, that was initially beta tested with known potential clients of the product 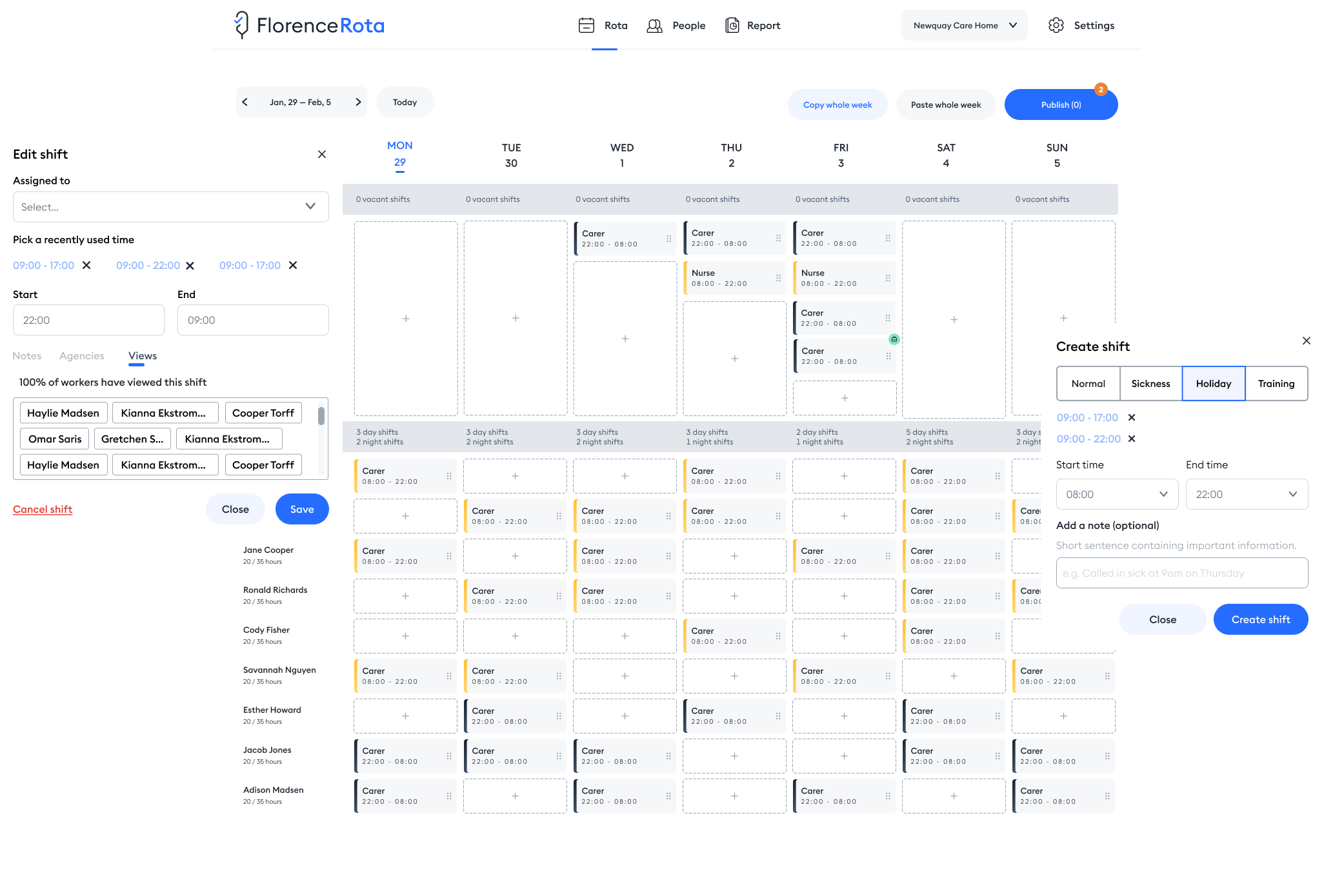 In my initial 6 months at Florence, I spent time building the companies 2 other key products - Florence Academy & Florence Flex, but in order to expand and grow the company, the aim was to tackle an additional angle that would all round benefit the users the company served on a daily basis. Despite there being existing Rota systems out there, there was not a solid product that catered ttothe specific users so features for these set of users felt limited.One key aspect of the project was to ensure the users were at the centre of the entire design process. Before commencing with wireframes, understanding of how care home managers currently utilised their systems was essential. Over several weeks care home managers were interviewed, which allowed for some key questions to be answered about how best to layout the rota system and the pain points that would need to be resolved.- 100% of care home managers struggled with adjusting to last minute changes.- On average care home managers spent 3+ hours beyond their working hours managing their rota.- Keeping workers in the know of changes was one of the key pain point of many managers. 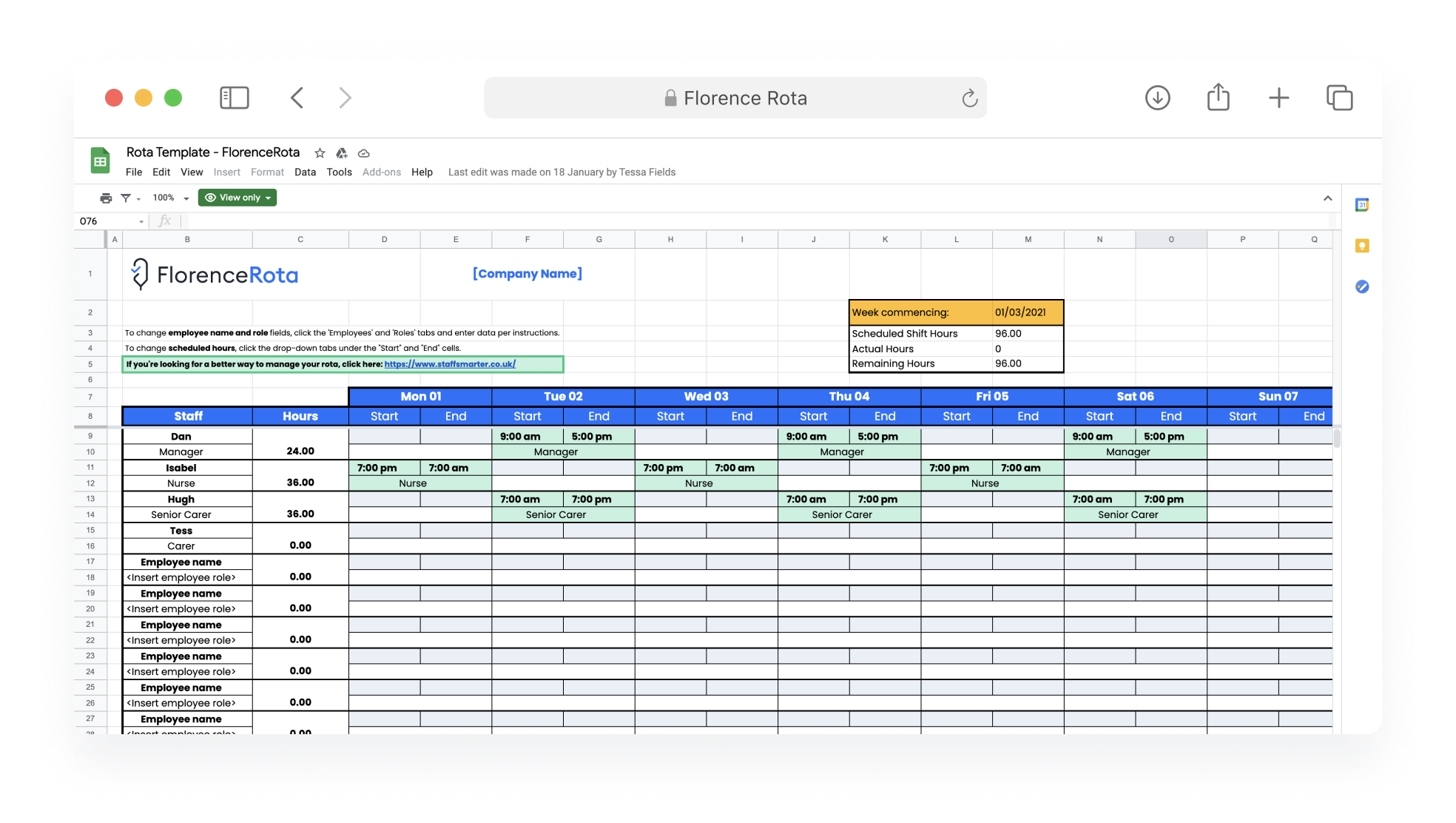 Due to needing to configure a simple solution quickly to be tested on the market, we used a series of team meetings and user research results to agree on key flows and visuals for the product. This allowed myself on the design side to quickly understand limitations around designs early.Based on the research and studying of numerous users care homes we established some essential routes for the users that would lead to making their lives easier and the process of managing a rota more efficient.- Creating a rota- Add staff members- Quickly create Multiple shift types- Managing Multiple locations- Organising absences 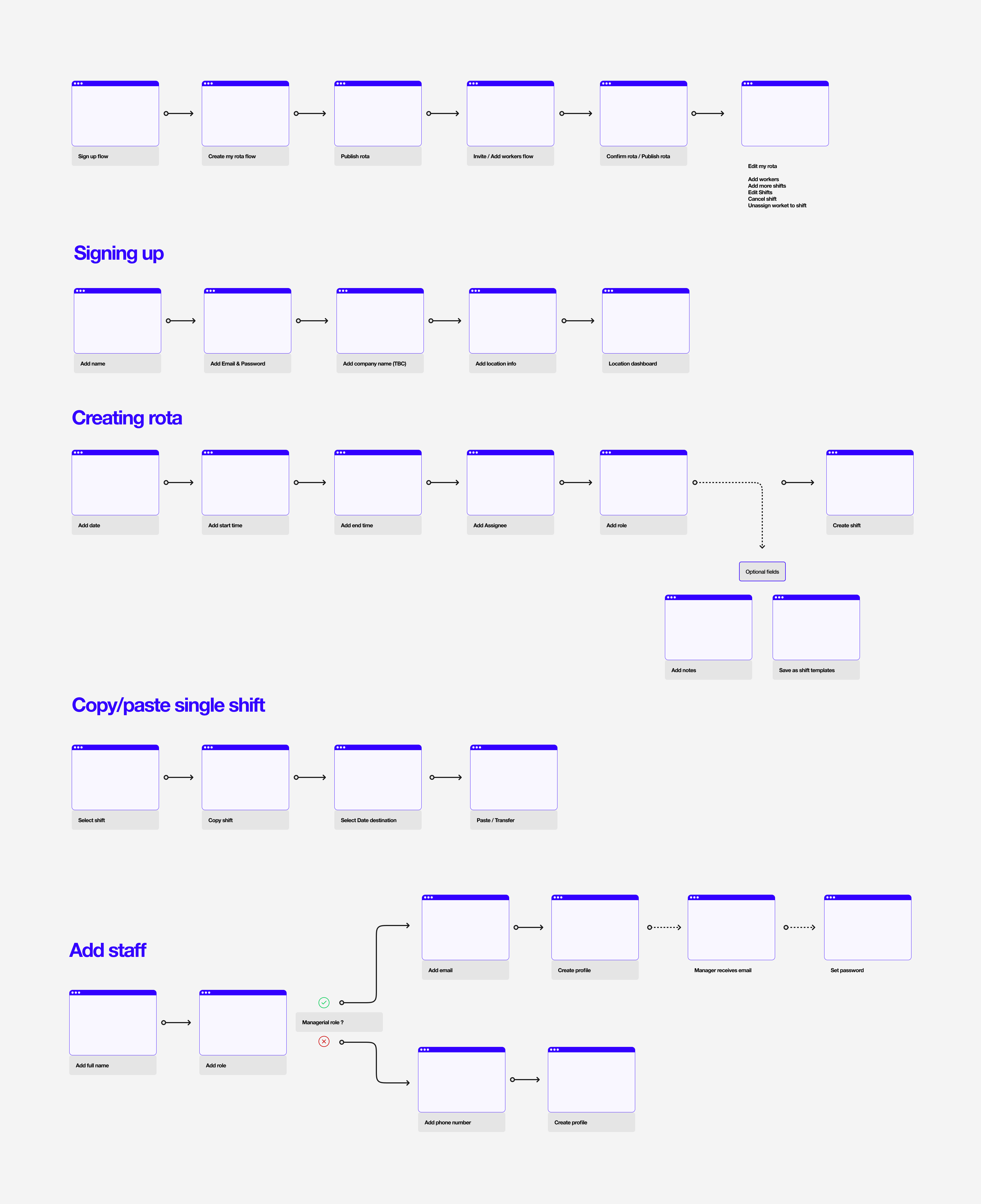 In order to quickly get feedback on designs and flows created, we often contacted both clients and workers to get their feedback. This allowed me to quickly iterate and get to a positive solution quickly. These session were often carried out via Zoom/Google meet due to Covid restrictions at the time. These usability sessions were vital in managing complicated flows such as how to get managers building rotas quicker. Below is a rough example of some flows created to better understand user suggested changes as well as necessary changes based on developer input. Alot of the testing done around the product occurred pre launch, several of the users to this new product were being migrated from a previous product, so as well as ensuring the functionality there were used to was present, it was crucial they could identify the new locations of any information they needed as certain hierarchies had changed:

- Inviting users for usability testing sessions with prototypes, showing them prototypes of small journeys and breaking them down in small tasks that we could assess while surveying them asking questions about what they were seeing.

Based on the feedback designs were regularly updated and adjusted to ensure the process was lean through out. 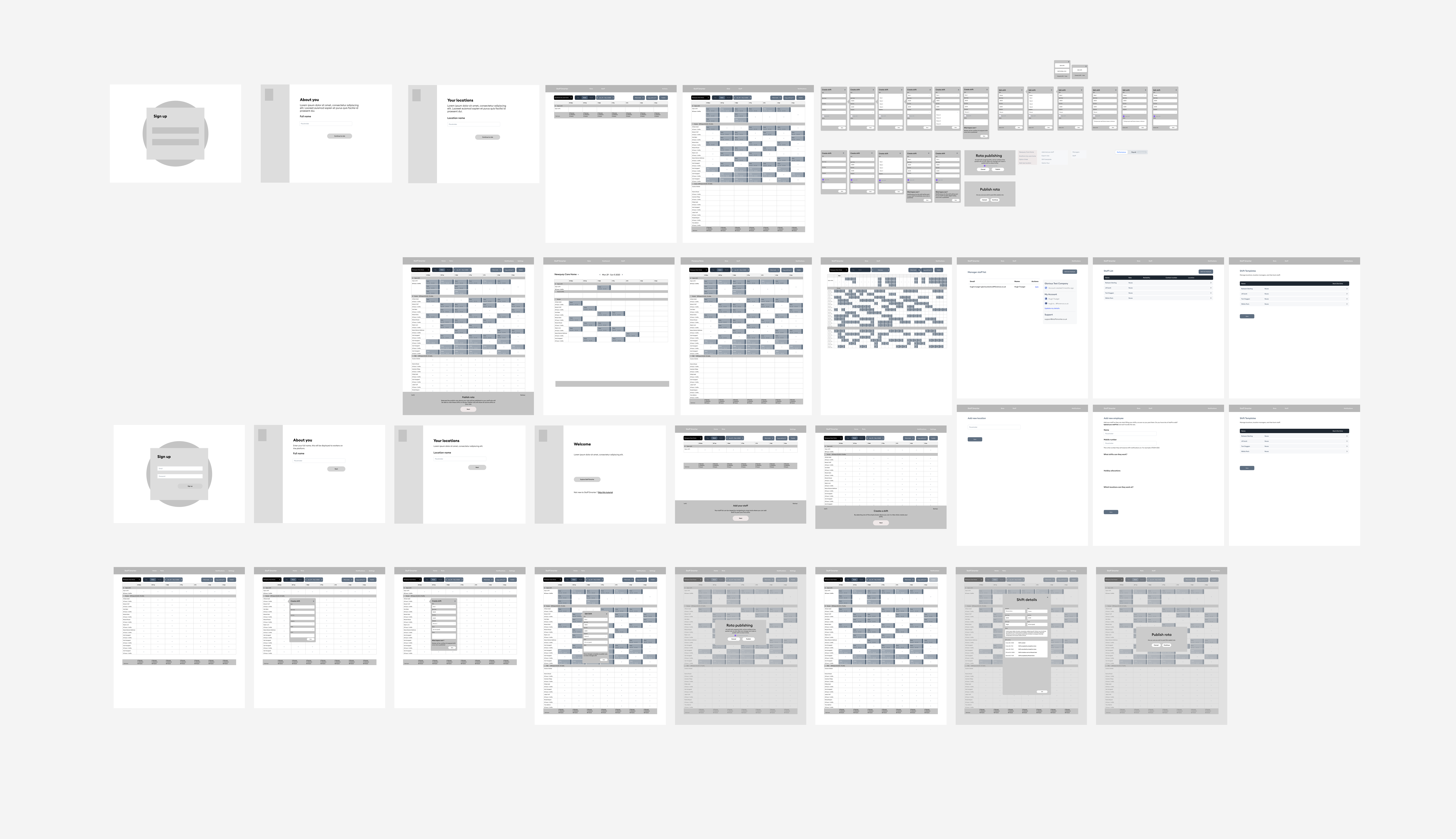 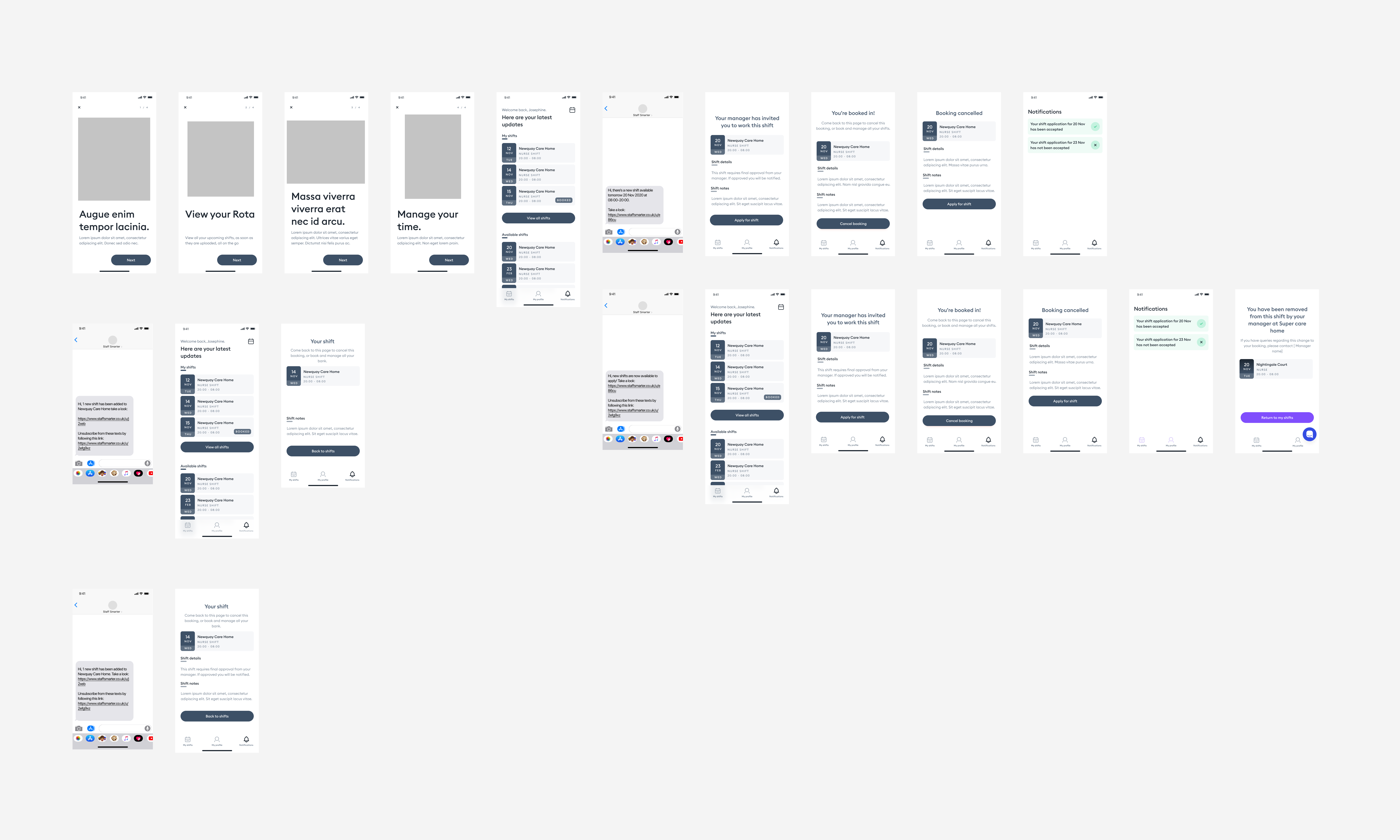 Once the initial MVP Product was designed in high fidelity and handed over for development, I quickly began discussing the next stages of the product and features that would allow the product to be even more competitive. Below is a list of features developed for Florence Rota 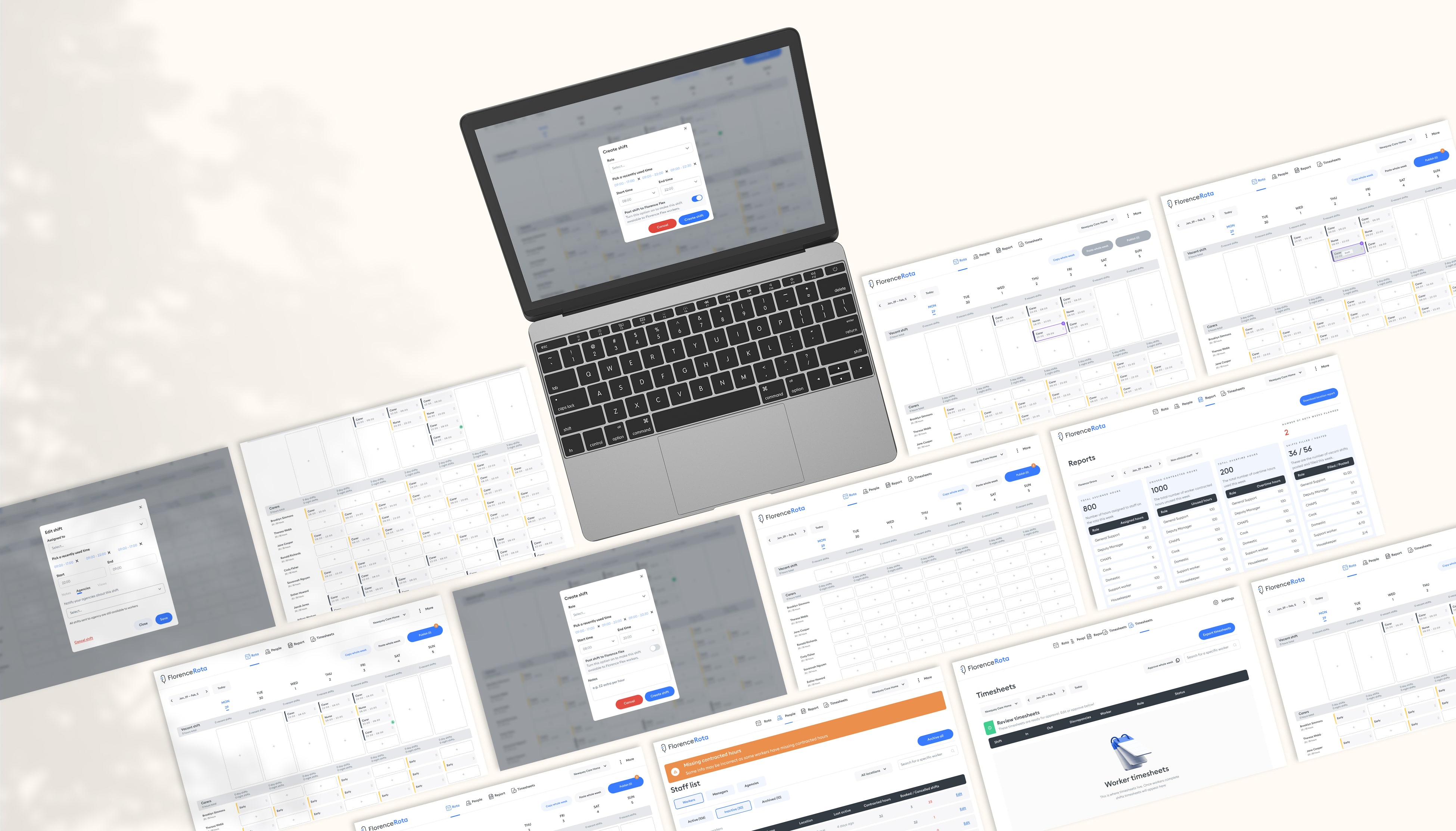 Several features quickly became key to the process, despite being an MVP there were must haves the project needed. Throughout however one key target was to ensure we were reducing the level of effort required to do tasks or were creating a way where user wouldn't have to repeat longer actions for a while. Below are a few screens of the final interface. displaying colours used- the lighter tone complemented with the larger bold buttons were perfect for the audience. The simplistic navigation was useful in helping users stop relying on paper or outdated excel spreadsheets.

As well as working with the team to build the products MVP, I spent as much time as possible establishing the foundations for rapid growth and success. The first step was to set to work on a component library and design system for the product, to allow for a consistent product, in addition to a product that developers felt was easier to follow due to its structure.

I built out a pattern library for Florence Rota, implementing rules around colour, typography, iconography and interaction patterns. I focused on those that were most essential to the product, and then expanded out to include those typically in design libraries.  I worked with a developer to build out the library into a coded component library. This not only meant that the product was more consistent and intuitive to use, but it also helped both myself and the rest of the team work at speed. 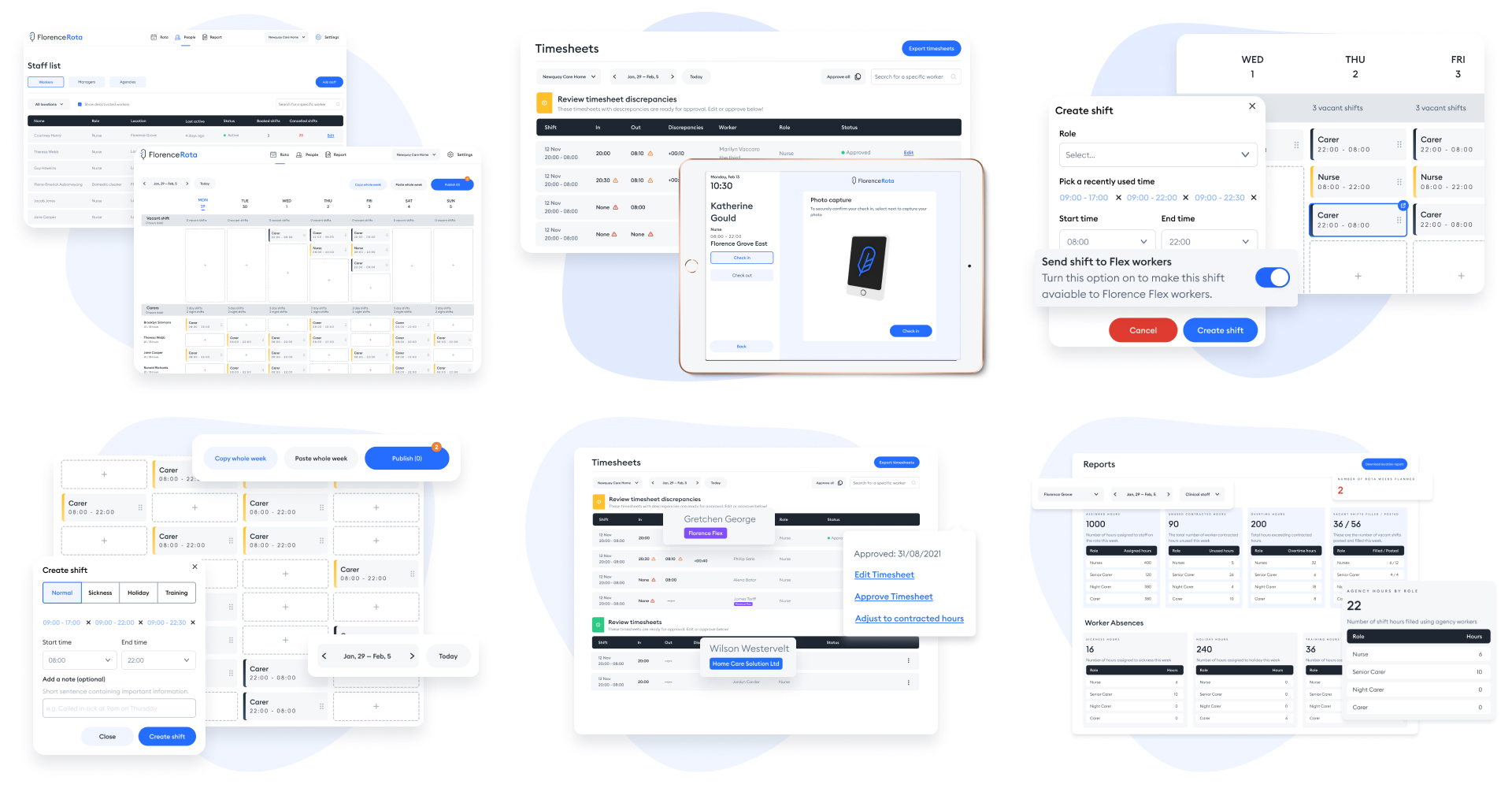 During the process of designing Florence Rota we came across a need for our users focused around monitoring who entered/exited their care homes as well as tracking their times for timesheets. After researching competitors and further understanding needs, it was concluded that the opportunity could only be truly effectively solved through hardware, rather than strictly just a software solution. In 2 short weeks for Florence I designed and tested a mobile tablet interface that met all the needs of our users and was seamless to use. The solution accounted for all the needs such as security, reliability, ease of use and ease of implementation. Final Solution presented below. 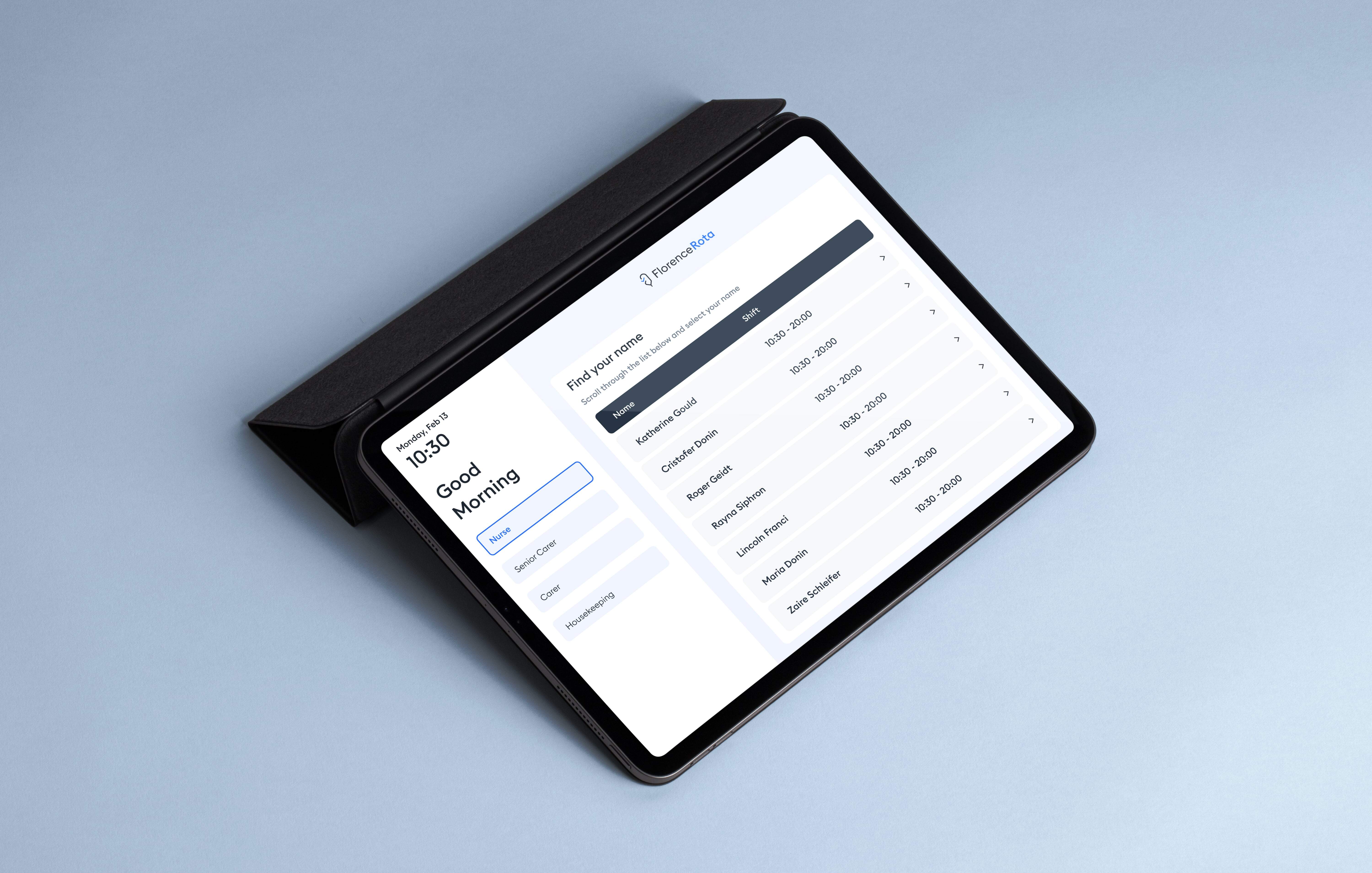